2022 Ultimated Guide | How to Record Shows on Sling TV Easily

This post provides the ultimate guide on how to record on Sling TV easily. You can use DVR or use EaseUS RecExperts to record on the go or schedule it on PC or Mac. The video will be saved on the computer which you can edit to remove anything extra from the show.

SlingTV is one of the best alternatives to cable TV, using which users can get a live TV viewing experience at a much lower price than satellite or cable TV providers. It hosts a ton of categories of channels from sports, news to hit TV shows and movies. The channels are similar to the ones offered by cable or satellite TV. However, Sling has a lesser number of them and costs less money every month. Users could stream Sling TV on televisions using the Sling TV app on phones, media streamers, and computers; no cable box is required.

However, multiple users are concerned about whether they could record their favorite shows so that they could view them later; so if you have already ditched your cable TV provider or are planning to shift to Sling TV, Here's your answer: Yes, users can choose to record Sling TV shows either using the DVR or third party applications. Here, we will show you some easy ways to help you record on Sling TV without any hassle.

How to Record Sling TV on PC/Mac [No Time Limit]

EaseUS RecExperts is a free versatile video and audio recording application with multiple use case scenarios, from filming, editing, and combining audio to capturing TV shows, podcasts and movies. This free video recording software has performed exceptionally well in extreme situations such as capturing movies, or TV shows from a media plater, recording voices, capturing podcasts and interviews. The software can be used to capture Sling content and be used for adding voice-overs, trimming, splitting, and more. With the supreme screen recorder built-in, recording Sling has become a breeze.

EaseUS RecExperts has an additional bonus in the form of an excellent and easy-to-use user interface, allowing beginners to understand what they are doing. The application packs in the best available tools, with support for recording in various file formats. Additionally, the team at EaseUS has been continually upgrading the program, adding tons of new features, and finding solutions to issues faced by users. Overall, it is a perfect option for recording Sling shows on PC or Mac.

Here is how to record Sling shows on PC:

How to Record on Sling using Cloud DVR - Direct Way

Actually, there is also a direct way you can opt for recording live shows on Sling, which is to use the Cloud DVR.

It offers two DVR services: its free service provides 10 hours of recording space, and another one is Cloud DVR which gives you access to 50 hours for $5 per month. The word does not say more, so let's jump into the details for recording Sling TV with DVR.

How to record Sling shows with Cloud DVR:

Step 1. Sling's cloud DVR is available on Sling supported devices. So whatever device you have Sling installed on, go ahead and launch the application.

Step 2. From the top menu, which lists: My TV, On Now, Guide, Sports, and more, choose the Guide menu. 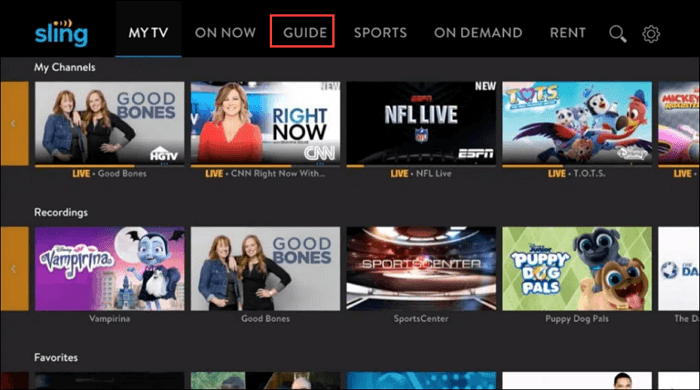 Step 4. You'll find a Record button placed next to the Watch Now button once you click on your selected show. 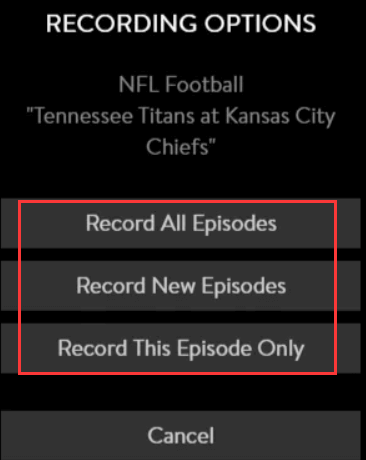 Step 6. That's it; it's that simple. With this, once the show has finished, you can find the recorded show under My Recordings.

Bouns Tip: How to Find or Delete Your Recordings on Sling

If you use a third-party screen recorder like EaseUS RecExperts, you can easily find your recordings. However, if you record with the Cloud DVR, how do you find the recorded TVs? If you still have no idea, check the below solution now:

Step 1. Launch Sling, then click on the My TV tab.

Step 2. Next, click Recordings to display all your recordings on Sling Cloud DVR.

Step 3. Finally, select the one you want to watch or delete. That's it.

With that said, EaseUS RecExperts is our first choice when it comes to recording Sling shows. It has quite a few benefits over Sling's DVR as one doesn't need to purchase additional cloud storage, as all the recordings are stored locally on the computer, one can access the files anytime, share them with others, and more. Considering all the included features, EaseUS RecExperts is the go-to solution for recording Sling TV shows.

FAQs on How to Record Shows on Sling Easily

1. Does Sling TV have a DVR or on-demand?

Sling TV offers its users DVR support. However, there's only limited storage of 10 hours of content with the free version. Users will need to purchase a subscription to record additional content.

2. Can you record Sling TV on TiVo?

No, TiVo doesn't offer the ability to record Sling TV on its platform.

3. Can you record shows on Sling TV?