There are many reasons why you need to record a video. For example, to make a video tutorial for a better and more intuitive presentation, record a video that you can't download, or record a real-time video so that you can share fun things with your friends on the social platform. All the work can be done with free video recording software. an excellent screen recorder.

On the Internet, you can find plenty of screen recorder, but they vary in functionalities. It's essential to choose the right video recording software, depending on what you intend to do. This post covers the top 13 best free video capture software. Now take a look to find the most appropriate one.

Here is a video about free video recording software. Check the recommended options in it!

If you are looking for free video capture software on Windows 10, you cannot miss EaseUS RecExperts. This screen recorder for PC can be regarded as the best video recording software available for both novice and pro. It allows you to capture your screen area according to your needs, such as capturing the full screen or a specific part of your screen.

With this software, you also can record streaming video, record Teams meeting, record YouTube live stream, or more easily and quickly. If you want to record screen and camera at the same time for online courses, you also can rely on this software. Most importantly, it offers you a basic video editing tool that can help you trim the recordings.

If you want to download this useful tool to capture what you need, click on the button below to get it for free.

How to Record with Free Video Capture Software Windows 10:

Step 1. Launch the EaseUS screen recorder, and click on the "Online Video" button that looks like a small TV on the left panel. 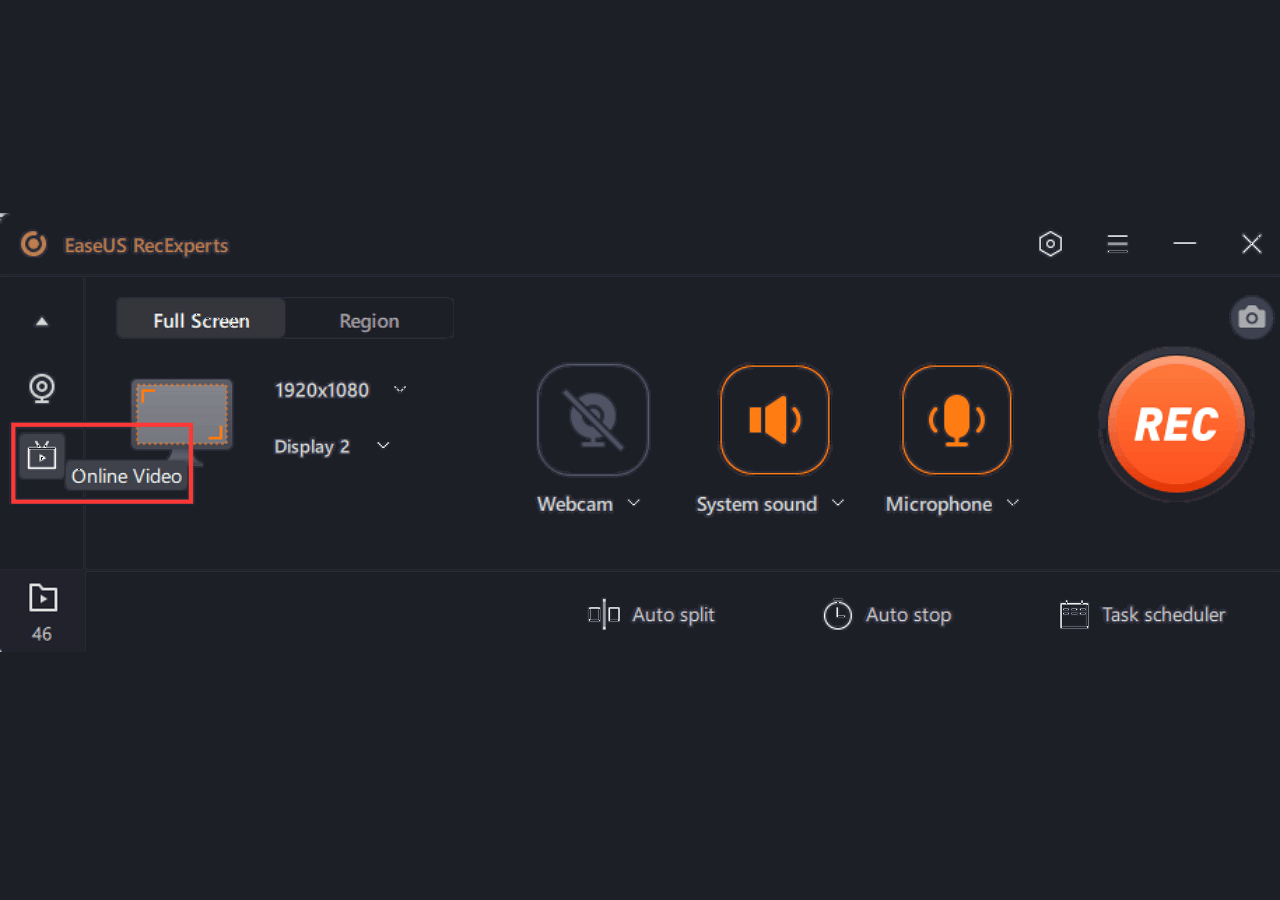 Step 2. Here you can see popular streaming sites, like YouTube, Netflix, Amazon Prime, Disney, Hulu, etc., and choose your desired one. If you cannot find the streaming site you want here, click on the "+" button.

Then, a pop-up window will appear, and select the "Restart" option. 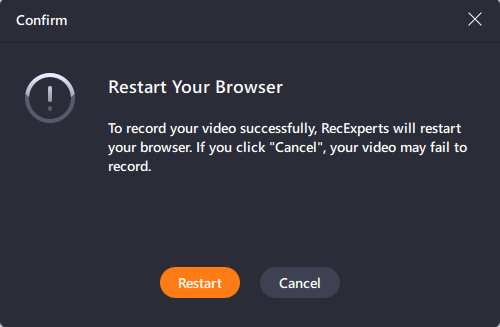 Step 3. After restarting this program, you need to select the recording area, audio source, webcam devices, or more according to your needs. Then, click on the REC button to start the video recording.

To pause or stop the recording, you can choose the corresponding button on the floating toolbar. 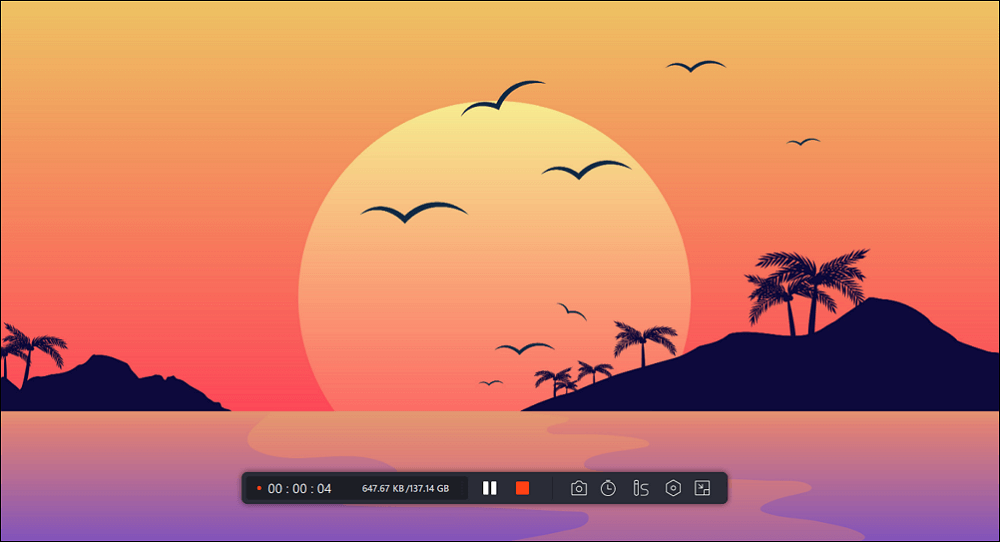 Step 4. When the recording is over, you can preview the recorded videos with the built-in media player easily and quickly.

Yes, that's right, don't get fooled by its name. VideoProc Converter, as the name implies, is indeed a video converter. But besides the feature of converting audio/video formats, this program also has a built-in video downloader, DVD converter, video cropper, and of course, a video recorder. And in fact, the video recorder works like a charm.

This software offers three recording modes: screen, webcam, and PiP mode for both screen and webcam. In the PiP mode, you can apply the chroma key to record video with virtual background. This  video capture software allows recording in various formats just like OBS. Use MP4 (by default) for better compatibility and MKV for better stability.

Using VideoProc Converter is as easy as 1-2-3. For video tutorial makers, it provides a range of utility tools to mark, crop, or highlight important areas during recording. While gamers can save the epic boss kill or upload it to YouTube for more applause. 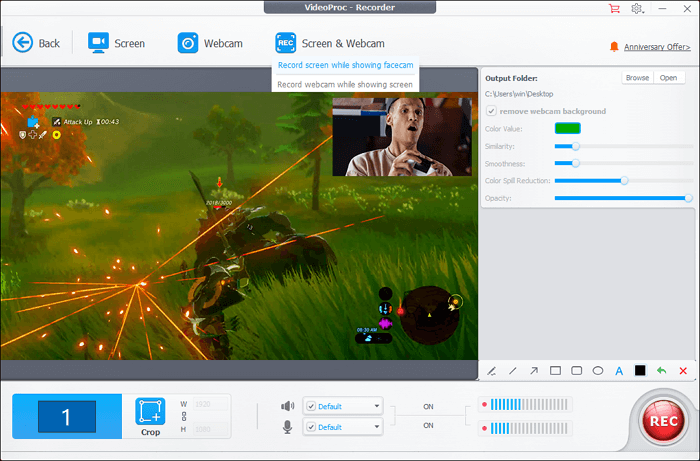 Windows 10 has a pre-installed free video recorder named Game Bar for anyone who wants to capture their game clips and screenshots. You can use Game Bar to record apps, especially for gaming capture. This software is a good choice if you want to record your wonderful moments of playing games or record a teaching video of playing games. For more tipa about Xbox Game Bar recording, you can move to the specific page to learn more information. 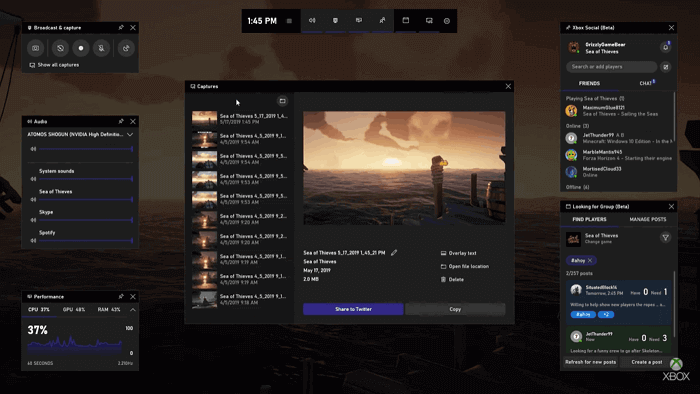 Flashback Express, released by Blueberry Software, is a free video capture software that can record screens, webcam, and sounds. It's packed with the same video recording features as the pro version.

You can use this free video recorder to capture your whole screen, a window, a selected area, or a webcam. Once the recording finishes, you can trim and crop your video with a simple editor, then export it to YouTube, an FTP server, or your PC. 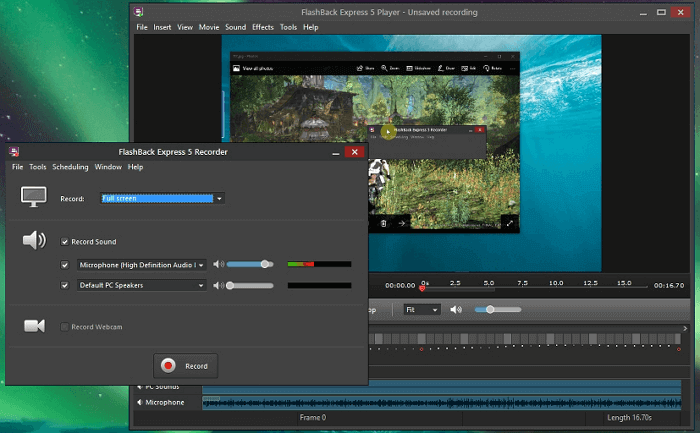 CamStudio is one of the best free video capture tools to record screen objects and audio activity on your computer and create industry-standard AVI video files.

You can choose to use custom cursors to record the entire screen or just a part of it. CamStudio can also add high-quality, anti-aliased (non-aliased) screen descriptions to your video recordings quickly. After recording, you can have "best quality" ones for burning onto CD/DVD. 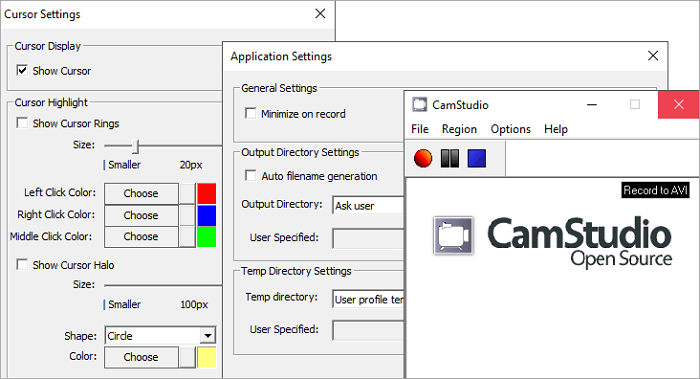 ShareX is a free open source screen recorder for capturing still screen grabs and recording videos. This free portable screen recorder can record an entire scrolling webpage, identify text via OCR, and even capture your screen according to a schedule.

You can also use this free video recorder to save your screenshot as a GIF instead of a video file, useful for sharing on forums and social media. After video recording, ShareX allows you to send your captured grabs and videos straight to a file-sharing or social media site. 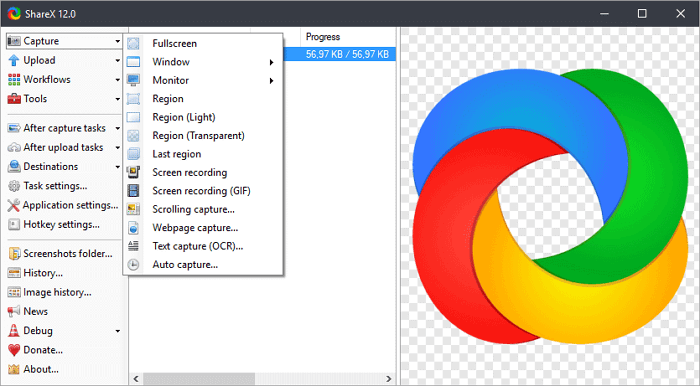 Screencast-O-Matic is a browser-based free video recording software on both Windows and macOS. It offers many features ranging from screen recording, video editing, video hosting, and sharing. You can use this free video recorder to capture full screen, window, region, webcam, microphone, and computer sound.

Besides, multiple video editing features are available while recording, such as zoom, trim your recorded clips, add captions, save them to your desktop, YouTube, or the cloud, or share a video link. 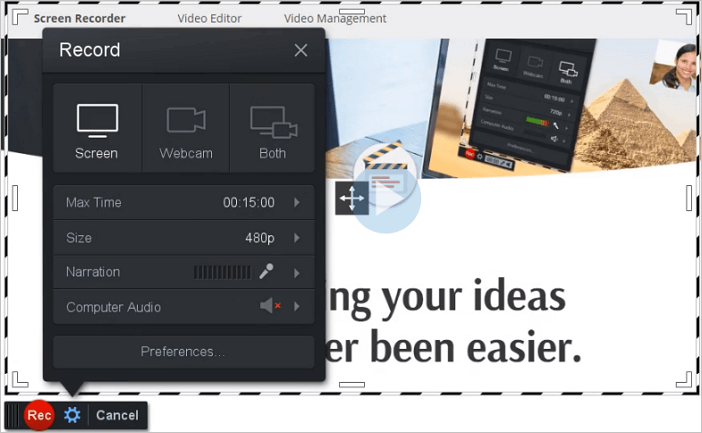 As the most recommended software in Mac, it is featured with its Lightweight and rich functionality. You can use it to capture whatever happens on your Mac screen while customizing the recording region according to your preference. You can record the full screen, record part of screen, or a specific application window.

Besides that, you can capture the audio simultaneously with this Mac screen recorder. There are several optional audio sources, including system sound, audio in the microphone, and both. If you want to record your voice with more advanced equipment, it's possible to install an external microphone since EaseUS RecExperts can be compatible with external devices like microphones and cameras.

If those features help you, you can click on the button below to download this recording tool for free.

How to Record with Best Video Recording Software on Mac: 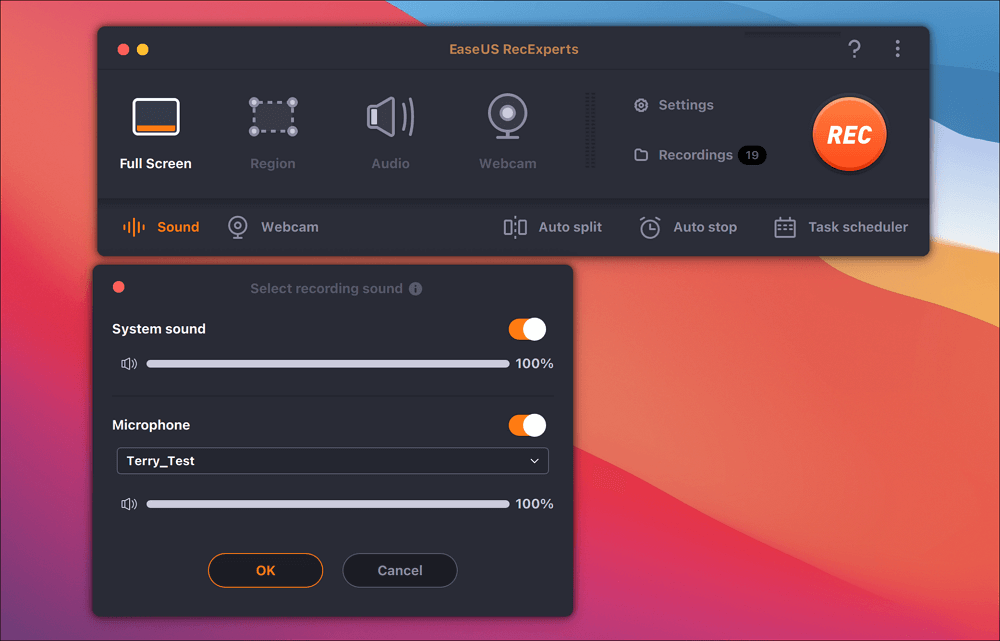 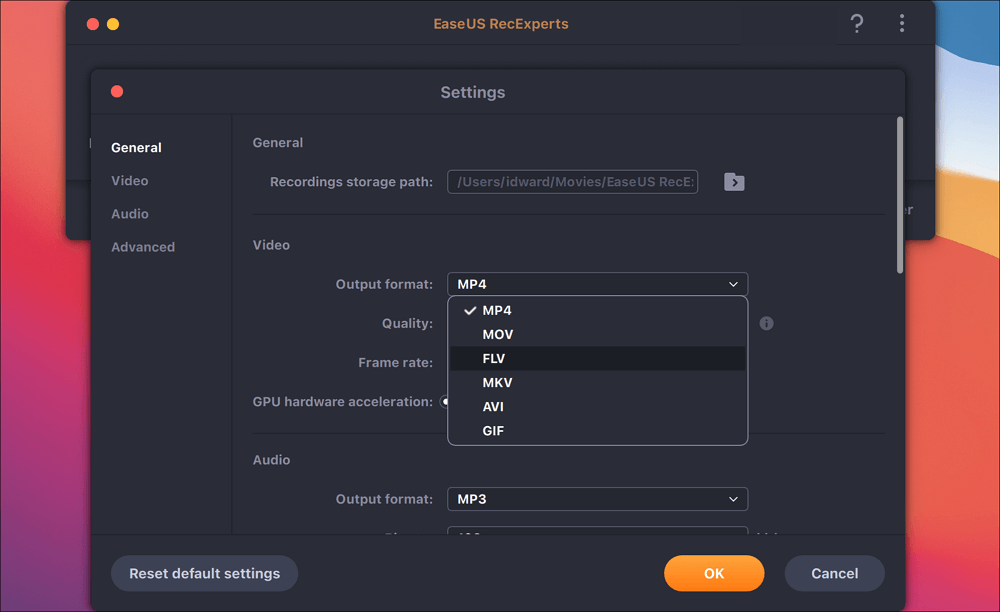 OBS Studio is a popular open-source and free video recording software tool that works well for live streaming games on Twitch and recording other information.

It has high performance in real-time video/audio capturing and mixing. It creates scenes made up of multiple sources, including window captures, images, text, browser windows, webcams, capture cards, and more.

You can immediately start recording from multiple sources at once, with a fairly nice amount of customization in terms of the options you have. What's more, the application streams with various platforms like Facebook Live, YouTube Live, Hitbox, Twitch, and more. 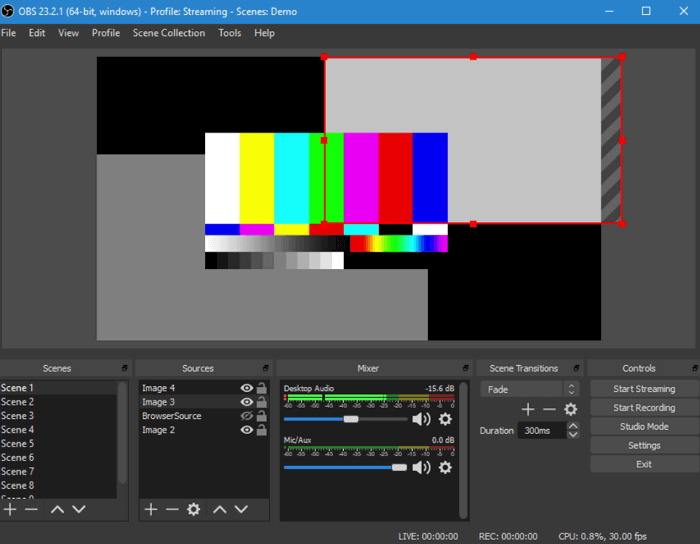 It even has some limited editing capabilities after video captures, such as cut, copies, and pastes, adds a new soundtrack, adds annotations, rotates your video, and more. This free video recording software uses onscreen controls, which are similar to a CD or DVD player.

Monosnap is one of the best free video recording software for Mac. You can use this program to record your screen and take a screenshot if you need to use it as a powerful screen recording software. It offers the option of turning on your webcam, mic, and system's audio all before the recording.

After video recording, you can connect the cloud drives such as Dropbox, CloudApp, Yandex. Disk, Box.com, Google Drive, or FTPs upload recorded videos to share with other PCs and smartphones. 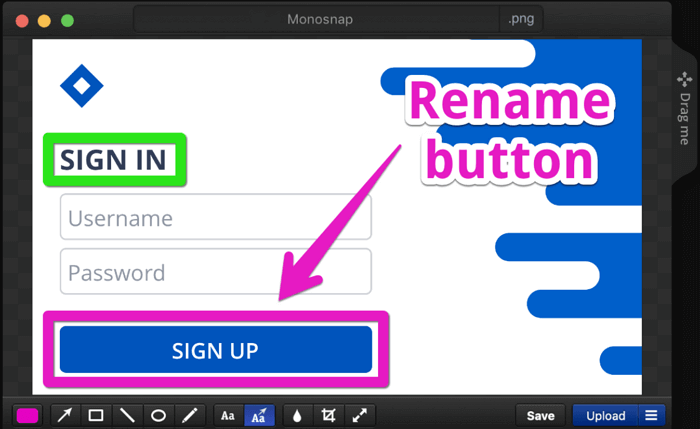 Jing is another video recording software for Mac, released by Techsmith. Unlike all other screen-capture software, The captured video can be saved in SWF format or stored in the screencast. Besides screen video recording, you can use this tool to take screenshots and edit them right after capturing. 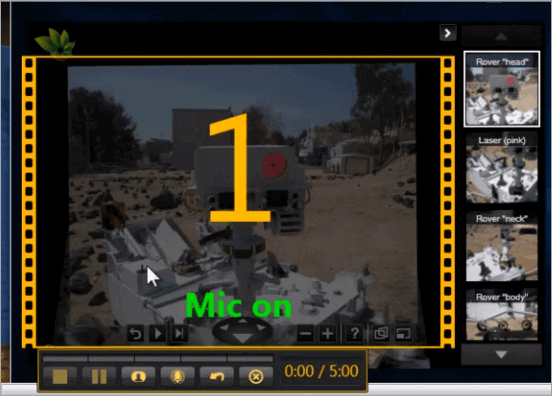 VLC is a free, open-source video capture software available on different platforms, including Windows, macOS, Linux, Android, and iOS. It's great music and video player with speed control of any format, including WMA, AAC, AIF, MP3, and much more on your computer.

What's more, it's also good at video recording, and you can regard it as one of the best music video recorders and use it as a free video capture software with built-in screen recording features. 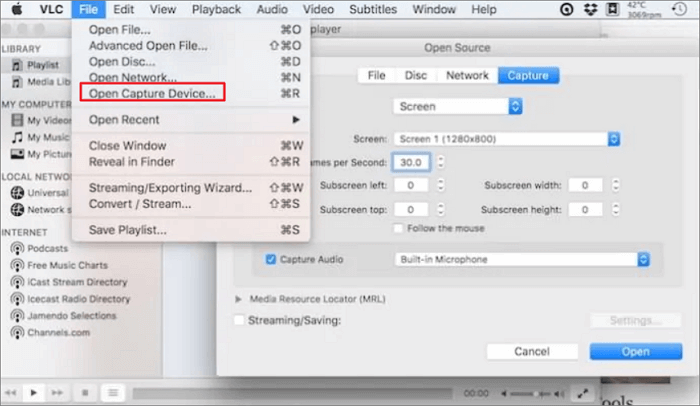 We talked about the top 13 best screen recording software in this post. Every video recorded differs from each others in many aspects, such as the interface design, operating system, and function.

Among all those video capture programs, EaseUS RecExperts is highly recommended because of its functionality and ease of use. Whether you are a beginner or an experienced user, this video capture software will be appropriate for you just the same.

Those FAQs are useful if you want to know more about the free video capture software on Windows and Mac.

When it comes to free video recording software, I strongly recommend EaseUS RecExperts. This screen recorder has an intuitive workflow that is best for both beginners and professionals. It enables you to record your screen, audio, and webcam with a few simple clicks.

2. How do I record video and sound on my computer?

If you need more recording features, you can try some video recording software like EaseUS RecExperts, OBS Studio, ShareX, and many more.

To record a video on Windows 10 for free, you can use the built-in screen recorder called Game Bar.

Step 2. When you are ready, you can click the Start recording button to begin your recording. Once done, click Stop recording to save the recordings on your computer.

4. What is the easiest recording software?