If your OBS is lagging, and you want to know how to make OBS not lag, don't hesitate to open this article and find ways to make your OBS run smoothly.

Who doesn't know OBS? It is one of the most innovative screen recorders that have existed up until now. OBS not only records your screen but also allows users to stream, create a virtual camera, record using a webcam, and many more. It also has other features such as adding new sound sources, audio, and many more. The versatile features of OBS made it one of the most used recorders until today.

But don't worry, because you will find out how to make OBS not lag in this article so you can use OBS smoothly.

There are several reasons why your OBS keeps lagging. The first and most common issue is the device that cannot handle the performance of OBS. It's not because the device isn't capable at all. However, when you open a heavy application, then OBS, sometimes OBS would be affected because it also requires extra performance too. So don't be surprised when your OBS lags when you're playing a game, because both OBS and the game require high performance of the device, and sometimes the device can't handle it.

The second cause why your OBS keeps lagging is the network latency. Network latency happens when there's a delay in a message sent between the device and the server that does the job. So, if it's not a device issue, it's likely that the network is the reason why the OBS keeps lagging. This issue usually happens when you're live streaming using OBS.

Read also: How to fix OBS discapture not working

How to Fix Lagging in OBS

Thankfully, you can still fix the lagging that happens to OBS. Some methods are a bit long or hard to do, but they get the job done. Here are things you can do if you want to know how to make OBS not lag.

Do not overlook your hardware when attempting to resolve lagging when you use OBS. OBS video playback may be hampered by a broken Ethernet connection, port, or router. Repair or replace them if they are loose or damaged.

#2. Lower the Amount of Bitrate

Streamers tend to employ higher bitrates to improve video quality, which might result in missing frames. Your connection to the server may be cut if you drop too many frames. Lowering the bitrate solves the problem of missing frames, allowing OBS to avoid video lag.

#3. Check the Security and Firewall of Your Device

Check to see if any security software is interfering with the proper playback of your movies if the OBS lagging and streaming issues persist despite having a strong internet connection. You can opt to uninstall your security software for the time being. You can also change the settings of your system firewall if it is interfering with the connection and making OBS lags. Just make sure the original setting is restored once everything is done.

Step 1. Go to the Windows icon (Start) at the bottom left of the desktop (the flag icon) and click Settings (the gear icon).

Step 2. Hover to Update & Security in Settings and go to Windows Security.

Step 3. Then, go to Firewall & network protection and choose a network setting.

Step 4. Find Microsoft Defender Firewall and turn off the Firewall. 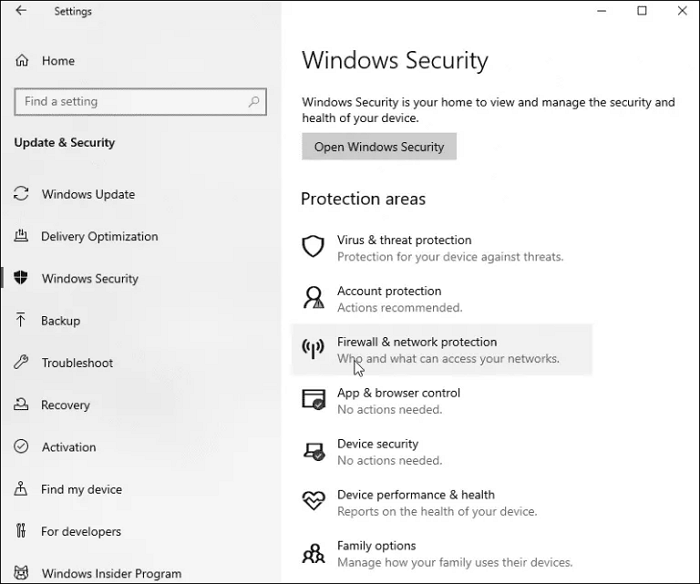 #4. Use a Stable Network

To avoid visual lag or freezing issues in OBS, you must have a dependable and fast connection. If you have dropped frames, it means that your connection is unreliable. Check your connection speed with any speed test program. If you can't resolve your connection issue, contact your service provider to troubleshoot any speed or network difficulties.

Wireless connections are not always dependable or stable. If your wireless internet is giving you trouble, remove the PC from the router and connect the router to the computer directly via Ethernet wire. If you are streaming, it's best to use a wired connection is preferable since it ensures a consistent network connection.

#6. Change the Settings in OBS

The OBS recording settings on each device are unique, depending on the performance of the device. Thus, you may need to play around with its settings until you find the one that works best so your OBS won't lag. The recommended setting for computer resolution is 1080p, but sometimes you might have to change it to 720p so OBS can run smoothly.

Step 1. Go to "Settings > Encoding." You can find "Settings" in the sidebar.

Step 3. Change the base resolution to 1080p or 720p according to your needs. If you don't know the exact size, you can take a peek at the Resolution Downscale section.

Resolution is the only setting mentioned here. There are plenty of things you can change so OBS works properly again.

If you think the instructions on how to make OBS not lag are too bothersome, you can opt for another lag-free screen recorder such as EaseUS RecExperts.

EaseUS RexEcperts is known for its screen recording feature, which allows you to snap a section you want and record that specific section only. If you're worried about the watermark, fear not because it doesn't have the watermark issue for recording.

Once you're done recording, you can give little edit with its built-in simple video editor. The editor itself doesn't have lots of features, it gives you the basics such as trimming, cropping, taking screenshots from the recording, and other basic features which allow you to provide sufficient editing before moving the video to a more advanced editor.

You don't need to worry about OBS lagging, since it is a common issue that can be fixed as long as you know how to make OBS not lag.

To make it short, if your OBS is lagging, you can focus on fixing the device's settings or improving the connection. After all, those two things are the most common factors that can result in OBS lagging. But if you don't want to know the hassle of how to make OBS not lag, you can use other lag-free recorders such as EaseUS RecExperts. It is lag-free, simple, and has plenty of features that you can master easily. Not bad for an OBS replacement, right?