Slow-motion videos are famous for grabbing people's interests by increasing curiosity and slowly leading them to climax. Now, such videos are becoming a norm in the social media industry. Even the latest smartphones offer an in-built slo-mo feature to create these videos effortlessly. However, if you don't have such phones or want to play slo-mo videos, there will be a requirement for a credible slow motion video player.

Let's take a plunge into the detailed reviews of the 8 best slow motion video player and decide what suits you!

EaseUS RecExperts is actually a screen recorder, but now it also can act as a secure and stable slow motion video player. This video player with speed control lets you play almost all media files in multiple formats with desired playback speed. Also, you will be able to save playback history for later use. It does not only offer video recording but also quick player access for a better viewing experience. You will get lossless playback since it is a 4K video player supports up to 4K HD videos in raw format.

Further to that, you can effortlessly record imported videos while playing. Managing all the files will be easier than ever. Even you can batch import or delete the video or audio files whenever required. Lastly, it allows you to fulfill editing functions, like trimming videos and adding opening/closing credits. 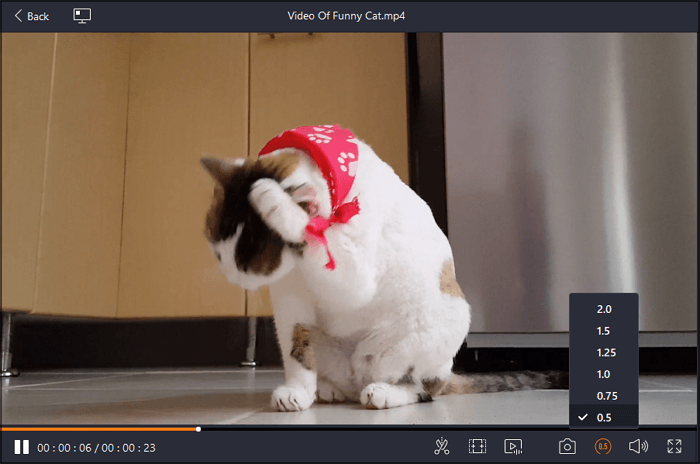 Another leading slow motion video player for Windows 10 is VLC Media Player, which helps you choose the playback speed from the five available options. You can rip videos from optical discs and play them at a slower pace. Since it supports almost all popular formats, you won't encounter issues while playing any video.

More so, you can quickly change other video and audio settings like aspect ratio. Along with the playback controls, this open source video player allows you to crop, zoom, and deinterlace your videos. 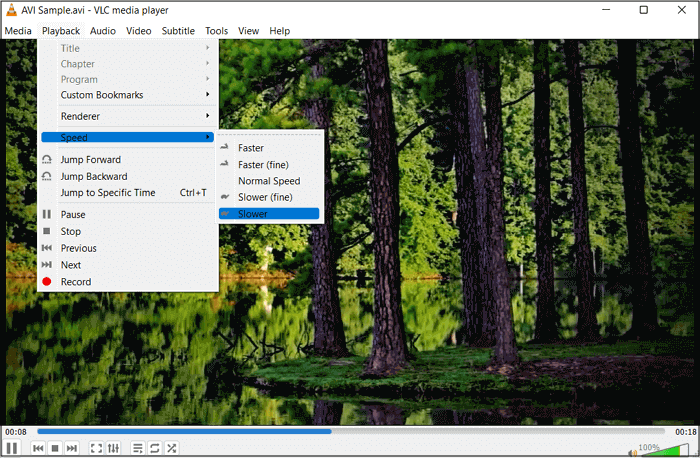 Windows Media Player is considered the best slow motion video player for PCs since it either comes pre-installed or you can get it from Microsoft for free. It lets you enjoy good quality videos, even after ripping from DVDs or optical discs. You can speed up video playback as you like.

Some of its advanced features include playlist creation and synchronization with external devices. Also, you can listen to music tracks and stream audio/video easily. Even it offers downloading and purchasing media files. 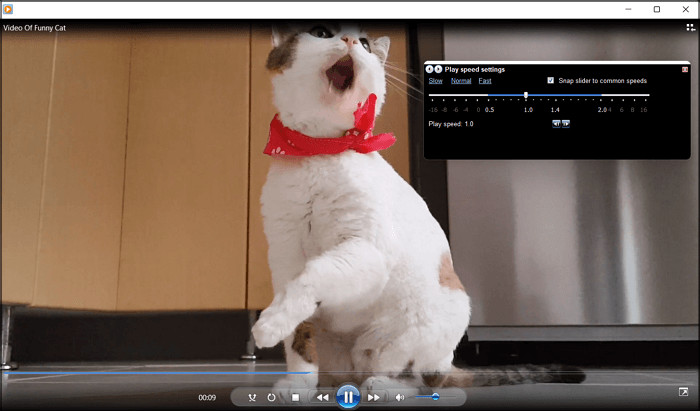 MPC-HC will be the ultimate solution if you want a lightweight but open-source slow motion video player for Windows 10. It offers an extensive range of playback rates regarding video motion and frame rate. You can't only increase, decrease, or reset the pace but also adjust settings after playback.

Moreover, it supports almost all devices, so you can play files from the system, URL, DVD, BD, and Directory. Lastly, you can customize its options according to your needs. 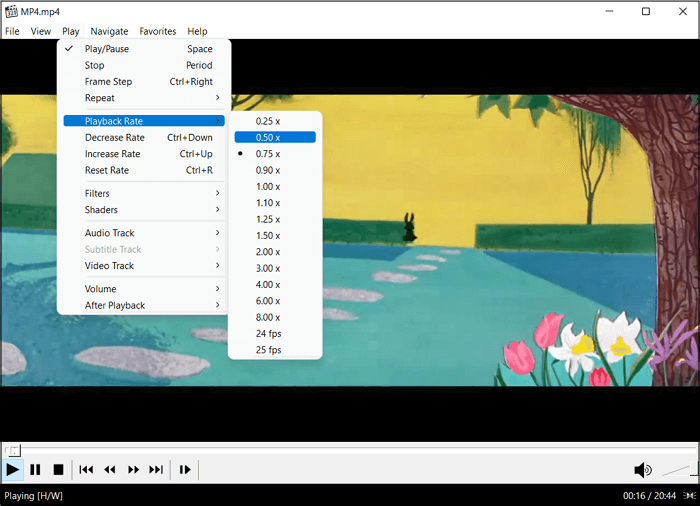 Movavi Video Editor is a fantastic software that not only helps you play your videos in slow motion but also saves them for watching at the same rate later. It offers full zoom features along with playback control over videos. Plus, you can watch videos smoothly by turning on stabilization effects.

Even settings the aspect ratio is easier, just like the picture-in-picture video playback. Along with that, it assists you in editing tasks, like adding effects, filters, animation, transitions, text, subtitles, and much more.

KMPlayer is a convenient slow motion video player for Windows and Mac users. It aids you in settings the video playback speed from slower to faster, like 0.25x to 4x. Besides playing your favorite video section on repeat, it lets you enjoy the freedom of subtitle size and color. However, you can use its equalizer feature for a realistic experience.

Not only is it possible to play YouTube videos directly via URL but also you can keep playing them in the background without any hassle. 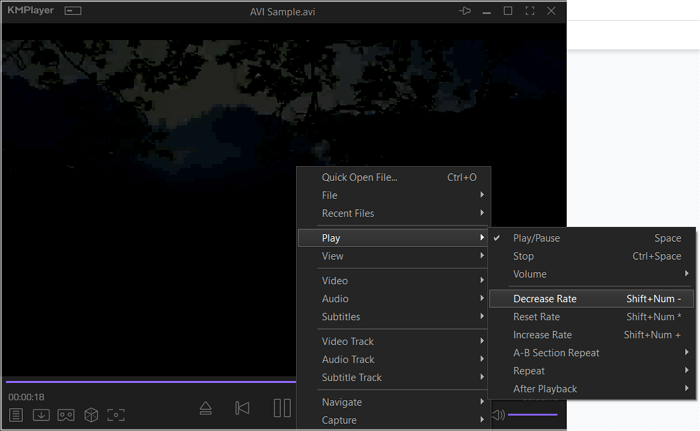 GOM Player must be your way to go if you want a free slow motion video player for Windows 10 that can play almost all video formats. You can avail yourself of the default, fast, and slow playback speed, along with the time jump and A-B repeat feature.

Also, changing the settings of video, audio, and subtitles is easier than ever. Even it helps you flip, rotate, mirror, and sharpen videos. Last but not least, you can play the damaged files on Windows by finding extra codecs. 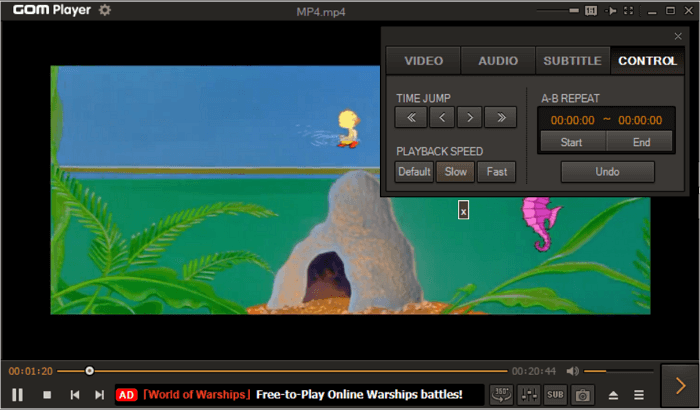 Here is a Microsoft slow motion video player for Windows 10 that fulfills your basic playback needs. It aids you in playing videos in slow motion or 2x speed, saving it to disc for the future. You can increase or decrease the volume as per your choices.

Also, it is possible to cast your video on a big screen effortlessly; however, make sure it's discoverable. More so, it lets you render videos at average, half, 4x, and 8x speeds with no audio. 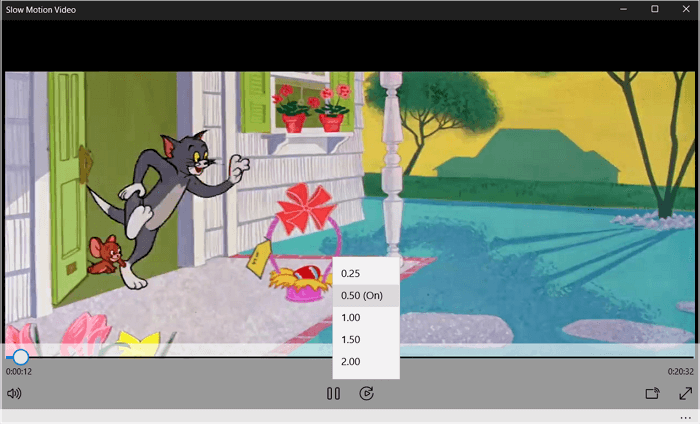 Watching slow-motion videos can be an excellent experience; however, looking for the best slow motion video player is tricky. Even though the market offers various players in this regard, the recommended ones are the most credible.

But if you want the flexibility to edit and play your videos, EaseUS RecExperts proves to be the ultimate solution. It offers you not only recording but also lossless playback with quick player access. Also, you will be able to use its wide range of features. So let's try it once!

1. Which video player has slow motion?

The multimedia market provides an extensive range of video players that help you play or edit slow-motion videos. Some of these include Windows Media Player, VLC Media Player, and EImedia Player. However, EaseUS RecExperts offer the flexibility to watch videos at desired playback speed and multiple other functionalities.

Yes, VLC Media Player lets you play slow-motion videos on any system, i.e., Mac, Windows, iOS, Android, and Linux. Even you can use some basic video editing features if required. Since it supports multiple file formats, you won't face any issues during playback.

3. How can I make a video play in slow motion?

If you want to play a regular video in slow motion, you need to change its playback speed. While playing videos on VLC Media Player, click Media > Open File and browse to open the video. Once opened, press Playback > Speed to choose the desired pace. It provides you with five options, including slower (fine) and slower.

4. Which is the best slow-motion video maker?

Some free and paid slow-motion video makers are being offered. Clideo is an online solution, Video Speed for Android, iMovie for iOS, and EaseUS RecExperts is for Windows and Mac users. You can opt for the one that best suits you since it depends on your preferences.