Do you know how to screen record on Windows 7? Windows 7 computers don't offer a direct option to record the computer screen, unlike Windows 10 PCs. You may have been looking for a powerful and user-friendly screen recorder that works flawlessly with Windows 7. You're lucky since we've gathered many workable solutions that mix usefulness and usability. Continue reading to learn how to use these screen capture tools on Windows 7. Then, let's come to the details.

Method 1: How to Record Screen with Free Windows 7 Screen Recorder

You can record your screen without any software, but for better operation and more advanced options, using a professional screen recorder is your best choice. In that case, EaseUS RecExperts, one of the best screen recorder for Windows 7 32-bit and-64 bit computer, comes to help. It can record your computer's webcam, microphone, and system audio on your Windows 7 computer. With this user-friendly Mac and Windows screen recorder, you can finish your recording tasks quickly.

EaseUS RecExperts is a screen recorder that lets you screen record anything on your PC. It can always meet your needs whether you want to record YouTube audio or capture streaming audio. It allows you to screenshot while recording and record videos with a virtual background. It has a wide range of supported output formats: MP4, MOV, FLV, MKV, AVI, MP3, AAC, WAV, OGG, WMA, FLAC, GIF, and PNG. In addition, it also lets you record gameplay on Windows 7 PC and screen record on Windows 7 with audio. The following are some other valuable features of this screen recorder:

You can perform the following steps to screen record your Windows 7 computer.

Method 2: How to Record Screen in Windows 7 via PowerPoint

Step 1. Open PowerPoint, and then create a new slide.

Step 2. Then head for the Record tab and click on Screen Recording.

Step 3. You may select a particular area to record by clicking the Select Area button in the newly revealed screen recording dock. Your system audio and cursor movement will automatically be recorded as well. Switch between these settings, or if you prefer, use the Windows + Shift + U keys to deselect Audio and the Windows + Shift + O keys to turn off the option to record the pointer.

Method 3: How to Record Screen with a Windows 7 Built-in Tool

Step 2. When you see the Steps Recorder window, click on Start Record.

Step 3. You can select Add Comment, highlight the area you wish to annotate, then type in your comments as you go through each step you want to record. 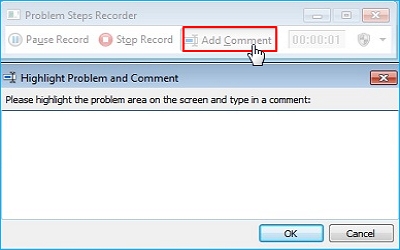 Step 4. Click on Stop Record when you're done. The recording will be saved as a .zip file, which a web browser can unzip and view.

The EaseUS RecExperts has apparent advantages over Problem Steps Recorder and PowerPoint that may help you quickly and effectively record screen actions. It can also help you to record with Windows Media Player and screen record with no watermark.

1. Does Windows 7 have a screen recorder?

If the recording icon is grayed out, this function is probably restricted. Do the following to lift the restriction: Open the Content Restrictions section under Settings > Screen Time > Content & Privacy Restrictions. To continue, scroll down to the Game Center area and select Screen Recording.

3. Does PC have screen recording?

To begin screen recording, press Windows + Alt + R keys. On the screen, most commonly in a corner, a tiny recording widget displays the time you've been recording.

"I hope my articles can help solve your technical problems. If you are interested in other articles, you can check the articles at the bottom of this page, and you can also check my Facebook to get additional help."