How to Record Switch Gameplay for Free (No Time Limit!)

If you want to show people how you play games on your Nintendo Switch, you may need to record them and share those recordings with them. But recording on Nintendo is not an easy task. Given that, this article comes in handy. Here we will walk you through how to record Switch gameplay with some easy solutions. So just check the solutions to capture gameplay on Switch.

Nintendo Switch is a fantastic video game console that enables you to play various games with it. Since it was published on March 3, 2017, this hybrid device has become popular worldwide. Nintendo Switch can be regarded as both a home console and a portable device, and its portability is why more and more types of games are transplanted to it.

Sharing videos about computer games are not a difficult task as there are enough screen recorder programs you can use on a PC. But how to record Switch gameplay? There are two frequently-used methods: recording gameplay with the built-in tool in Switch or mirroring Switch game on PC and recording it. This post will walk you through those two ways step by step. Keep reading if you want to know the details.

How to Record Switch Gameplay Without Capture Card

The most regular way for Nintendo Switch recording is using the pre-installed gameplay capturing tool. This is free and convenient for users who don't want to set up a capture card. This method comes with an inevitable defect: you can only record the gameplay for up to 30 seconds, but it's effortless to press the button and capture what you need directly.

How to Record on Nintendo Switch with Built-in Tool:

Here is a video tutorial about how to record Switch gameplay, and you can take a look:

How to Screenshot on Switch:

 Notice:
The built-in recorder only supports recording for up to 30 seconds. You can record Switch gameplay with a capture card for a long recording. >> Method of Recording Switch with Capture Card.

How to Record Nintendo Switch Gameplay With Capture Card

You can find all kinds of capture cards for Switch on the market, each of which has its own characteristics. The most significant difference between them may be the properties of the recording program they offer. A powerful capture card helps you record Switch gameplay without downloading any other software. Otherwise, you need to use a third-party game recorder for PC to capture the gameplay.

To avoid the time limit of recording Switch gameplay with the built-in tool, mirroring the game on a computer and recording the game using desktop recording software is a great choice. There is one essential tool to get that done, i.e., a capture card.

As long as you connect the captured card with your Nintendo Switch and your computer, what is happening on the Switch screen will show on your PC screen at the same time. Then, the recording tool offered by the captured card is the only thing you need to record the Switch gameplay.

Before using a capture card to record your Switch gameplay, you will need the following items. 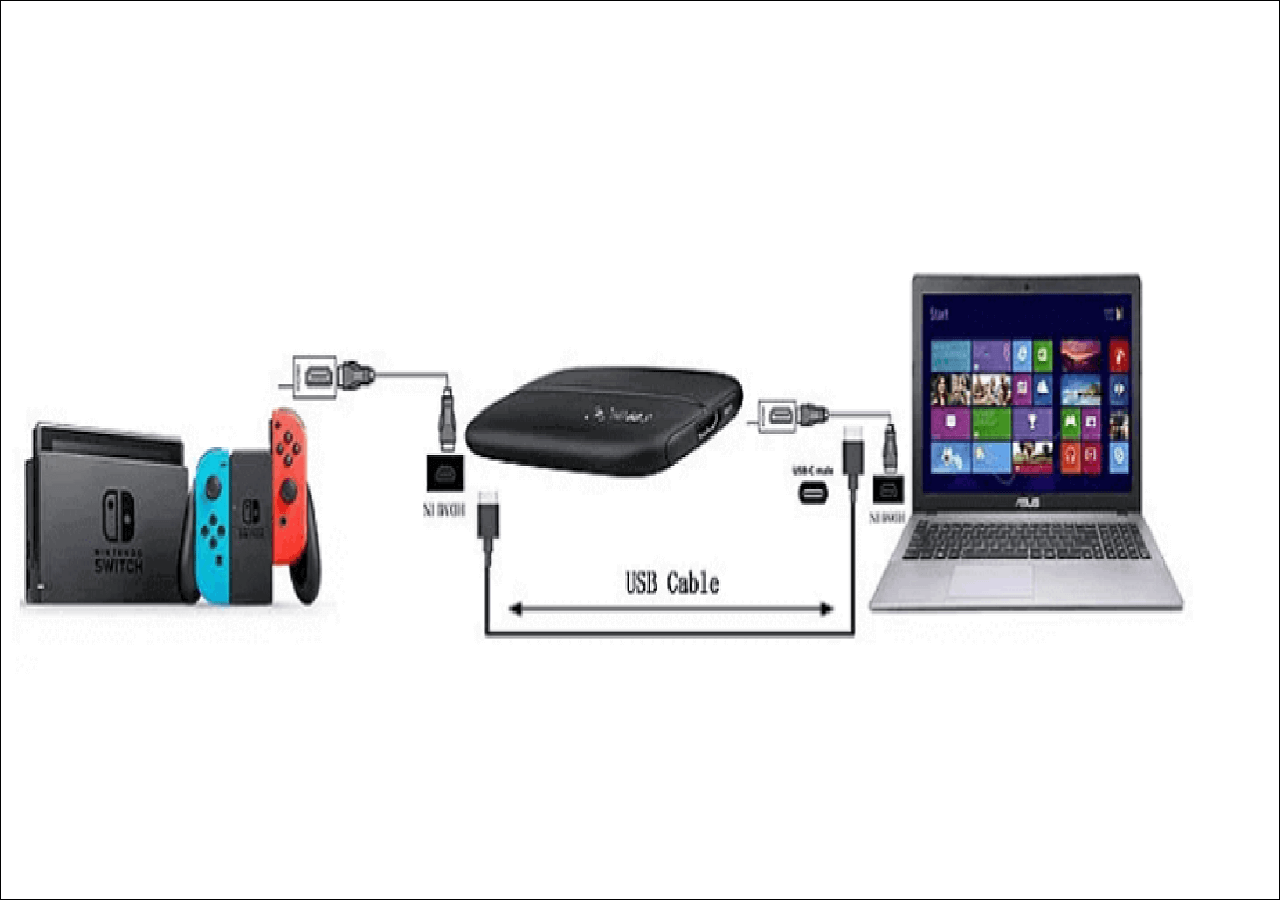 How to Capture Switch Gameplay on PC:

However, as the pre-installed recorder supports merely basic functions, you can only record the gameplay with a third-party recorder if you need some advanced features.

Here we take EaseUS RecExperts as an example. This program enables you to record Switch gameplay on your PC for a long time with high-quality output. It's worth noting that there are three optional video qualities you can select: 720P, 1080P, and 4K. Besides, this software supports starting and stopping a recording automatically, and you can set the tasks to do that. After recording, this software will give you a video trimming tool to remove the unnecessary part with ease.

For capturing a high-resolution gameplay video, this software is what you cannot miss. Click on this button below to download it for free. No registration is required.

The following are step-by-step instructions on how to screen record on Switch with a video capture card on PC.

How to Record on Nintendo Switch Using Capture Card:

What are Capture Cards & Benefits of Recording Switch on PC

Recording Switch gameplay on PC with a capture card is a good idea for many reasons. This part will offer you more related information about this method so that you can get your own Switch gameplay video conveniently.

1. What is a capture card for Switch?

The capture card is a device that can be connected to a computer to record on-screen content. In addition to that, the capture card can help encode what is happening on the screen so that you can play it as a Live stream or save it as a video file. However, the capture card cannot encode the data itself, and it helps an important role in transmitting the data from one end to the other.

You can follow the guide on the following picture to set up and use a capture card.

2. What are the benefits of recording Switch on PC?

Recording Switch gameplay on PC using a captured card is a great choice for those following reasons:

FAQs about How to Record Switch Gameplay

1. Can you record your gameplay on Nintendo Switch?

Yes, to capture video gameplay footage, you need to press and hold down the "Capture" button on the left Joy-Con. The captured videos can be viewed within the "Album".

2. How do I record my Nintendo Switch for more than 30 seconds?

Recording Nintendo Switch for more than 30 seconds requires external hardware. A capture card or a third-party screen recorder is needed.

3. Can you record Switch gameplay without a capture card?

The most regular way to record Switch gameplay without a capture card is using the pre-installed gameplay capturing tool. This is free and convenient for users who don't want to set up a capture card.

This post discussed how to record Switch gameplay in high quality with or without a capture card.

Whatever you choose, make sure the solution is suits you best. We hope this post can help you!